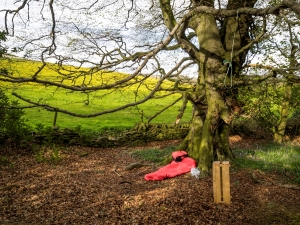 When I was first approached to work on a charity calendar for Simon on the Streets, the West Yorkshire based organisation that supports the homeless, I had no idea of the journey that would follow; the unease, the insight, the debate, the emotion and the positive feedback.

Unlike many of my contemporaries, I didn’t want to approach the subject of homelessness through my own eyes, that would seem presumptuous to me. I started out on a long and difficult research project to understand – truly understand – what challenges are faced by rough sleepers every single day.

I expected to be shocked, I expected to be upset and to challenge my own thoughts and feelings on the subject but I didn’t see the story unfolding in front of my very eyes until I took a step back. It was at this point during the rollercoaster ride of emotions that I was on that I realised I had to share this view of the world, from the eyes of a rough sleeper.

The images couldn’t be of young people in doorways or old women pushing shopping trolleys, they couldn’t be of old men begging on street corners or of dogs looking forlorn next to their dirty and unkempt owners – the pictures that I would take had to put the audience almost literally in the shoes of a rough sleeper.

It took some time to create the story board and to choose the final images that would take those viewing the images to another place, to a world of solitude, loneliness, isolation and of probable abuse and possible suicide.

Some of the images were incredibly difficult to capture; in order to take the audience to the position of the homeless, I quickly realised it would be me who would make this journey first. And so I did. I set out to recreate and to showcase the many situations – more than 19 in all – that I had witnessed first-hand from those I had interviewed sleeping rough.

My work has always been controversial, I like to encourage discussion and debate, I like to challenge the norm and to artistically put the cat amongst the pigeons. I don’t want people to like my work, I want people to ‘get’ my work and to appreciate the point and the message that I have worked so hard to get across. 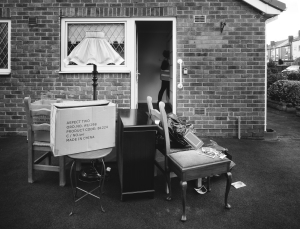 With Eye Spy it is about opening our eyes – seeing the world for what it really is. Not feeling better about ourselves for buying a man on the street a coffee but for recognising that you may be the first person in an hour that has responded to his mumbled request. The fact that these people live a life in hiding, despite being so awkwardly visible, is something we need to address.

What started out as a collection of images for a calendar soon became much more to me and I realised that I wanted to push this project harder, to make it even more of a challenge for the audience. That is when I started to create the installations that would really bring each scenario to life. 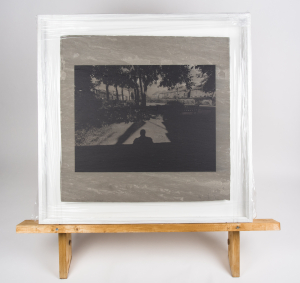 It soon became apparent that rather than having a calendar, we actually had an exhibition and a very powerful one at that. In complete contrast to the dark doorways and the cold pavements experienced by the homeless we exhibited in a small art gallery in Harrogate.

Welcoming people with plastic cups of wine set the tone for the evening. It wasn’t about depressing those who had taken the time to come along but it was about sharing something real that I had worked so very hard to express in the best way I felt possible – through my art.

As a Contemporary Fellow of the Royal Photographic Society, I was then honoured to be invited to showcase the Eye Spy works at Fenton House, the headquarters in Bath. Again, the same response. Not only did people take the time to come but they also expressed their appreciation at a collection that wasn’t ‘beautiful’ or ‘pretty’ but thought provoking and emotive.

I had not only challenged people about this subject but also pushed the boundaries. I had taken the contemporary art of photography to a new place and made people share in my thoughts and insights.

Del Barrett: “A visit to RPS HQ today and I was blown away twice – once by the howling winds (I’m sure they were approaching hurricane force) and then by Nigel Tooby’s stunning exhibition Eye Spy.  A truly contemporary body of work, using a mixture of media, Eye Spy shows ‘what homeless people see and experience’.  Moving, poignant and very inspirational.  If you’re anywhere near Bath, add this to your “must-see” list.”

It’s now on to the next stage in this journey where I will feature Eye Spy at the Magic Gallery in Charing Cross Arcade in London from Wednesday 20 April to Friday 29 April. I would like to invite anyone who has an interest in this subject – or who would like to challenge perception about rough sleeping – to come along.

It is with great pleasure that I display this collection once again and that I share the amazing and emotive journey that I have had. I feel privileged to be in the position to do so and to know that my work may just put the subject of homelessness firmly back on the agenda.